Who was Noah? He’s getting a lot of attention these days because of a movie, but those that have knowledge of the Biblical Noah, see a very different man than portrayed by Russell Crowe.

Genesis 6:9 This is the genealogy of Noah. Noah was a just man, perfect in his generations. Noah walked with God.

Is this a contradiction in the Bible? Is it possible that Noah could actually be just and perfect?

The word in Hebrew is tsad-deek’ which means just, lawful, righteous (man), and the word perfect (taw-meem’) means without blemish, complete, full, perfect. These words really mean what we think they mean but how is this possible?

In just a few more chapters we will see that after the flood Noah has a vineyard and became drunk (Genesis 9:20-21). How can we reconcile this? 1 Corinthians 6:10 tells us that drunkards will not inherit the kingdom of God.

We see similar language with Job. There was a man in the land of Uz, whose name was Job; and that man was blameless and upright, and one who feared God and shunned evil. (Job 1:1)

Paul is quoting from the book of Psalms here and referencing Psalm 14:1-3 and 53:1-3 and we also see this in Isaiah.

Isaiah 64:6-7 But we are all like an unclean thing, and all our righteousnesses are like filthy rags; we all fade as a leaf, and our iniquities, like the wind, have taken us away. And there is no one who calls on Your name, who stirs himself up to take hold of You; for You have hidden Your face from us, and have consumed us because of our iniquities.

Our iniquities have taken us away from God, the word means perversity, or moral evil, fault, iniquity, mischief or sin. We all understand that we clearly have sin, don’t we? Did Noah and Job somehow perform better at keeping God’s law and finding favor with Him than we are capable of today?

If we really think about it, it seems there would have been fewer distractions and less opportunity for sin doesn’t it? No television to watch, the women wore those bland gowns and not the tight shorts we see girls wearing today, but yet when we read about the wickedness of man in Genesis chapter 6 it appears that sin was every bit as rampant as it is today.

So how can Noah really be a righteous man?

Hebrews 11:7 By faith Noah, being divinely warned of things not yet seen, moved with godly fear, prepared an ark for the saving of his household, by which he condemned the world and became an heir of the righteousness which is according to faith.

Faith is the answer, it’s the only thing that can save and cause us to be righteous.

Our righteousness is only found in faith in Christ and that faith was every bit as present in the Old Testament as it is in the New Testament. To be complete in our understanding of Scripture we can’t be “only” New Testament Christians. We must believe that by faith God has been working all through redemptive history to draw His people to Himself.

This is no small concept for us today, because if we don’t grasp this, we don’t grasp the reality of God working in His elect all throughout time. We will miss how the whole of Scripture is pointing to Jesus. How He satisfied the righteous requirements of the law and that it is all about faith in Him, not something we can perform to be good enough.

Look how clearly Paul tells us this truth.

Romans 3:21-26 But now the righteousness of God apart from the law is revealed being witnessed by the Law and the Prophets, even the righteousness of God, through faith in Jesus Christ to all and on all who believe. For there is no difference; for all have sinned and fall short of the glory of God, being justified freely by His grace through the redemption that is in Christ Jesus, whom God set forth as a propitiation by His blood, through faith, to demonstrate His righteousness, because in His forbearance God had passed over the sins that were previously committed, to demonstrate at the present time His righteousness, that He might be just and the justifier of the one who has faith in Jesus.

Can we see the humbling reality of how big this makes God? If we think we have something good to offer, or somehow we bring anything but our poor wretched selves to the table, we are deadly wrong. Everything the Bible shows us is about God. If it’s about us then we are serving the wrong god.

2 Corinthians 3:4-6 And we have such truth through Christ toward God. Not that we are sufficient of ourselves to think of anything as being from ourselves, but our sufficiency is from God, who also made us sufficient as ministers of the new covenant, not of the letter but of the Spirit, for the letter kills, but the Spirit gives life.

If this does not bring you to your knees consider that your knowledge of Him is what He can do for you, not what you can do for Him. If He is your Lord then you will serve Him out of a pure heart to know Him more intimately and serve Him with urgency, for His profit and for His glory, not for your benefit. 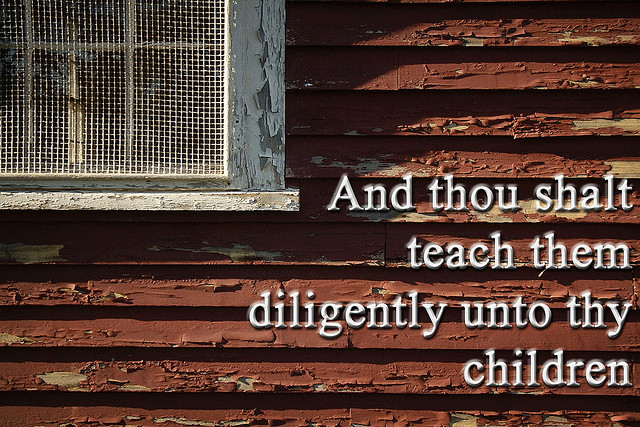 Today I write with much anticipation.  I’ve been holding onto some information that I hope you will find encouraging and useful in your daily application of life.  The catch to this is that you are a sold out follower of Jesus Christ and you desire to bring your life into complete obedience to Him.

This clearly puts people in one of two camps, more on that later.

I hope to write a several articles on the development of a Biblical family and our journey.  Our family continues to be challenged by God’s Word and I see the smallness of my vision.  I desire for God to pour out His grace as I work toward a much bigger plan.

Deuteronomy 6:6-7 “And these words which I command you today shall be in your heart.  You shall teach them diligently to your children, and shall talk of them when you sit in your house, when you walk by the way, when you lie down, and when you rise up.”

“You shall….”   Thus says the LORD.  Deuteronomy 6 is a command for fathers.  If you are in the first camp this is something you must do.  This is not optional for you men if you are going to lead your family as God has designed.  You are to teach the commands of God diligently to your children, every moment of every day.  Whenever you are with them you should be focused on teaching them lessons about living in the fear of the LORD.

This is NOT optional.  Can I say this any louder or with any more urgency?

His words still echo in my mind.  “Be consistent in family worship….  Have deep and meaningful conversations with your family, and turn off the television.  Be producers, not consumers.”  Ouch!!!  His simple words sunk deep into my heart and pierced me.

We had begun a consistent pattern of family worship many months ago and I was thinking we had a pretty good thing going.  Each morning we would gather around the breakfast table and open God’s Word and discuss.  Even more recently we began a study of the Proverbs and I began training our family in memorizing the Westminster Shorter Catechism.  So we had been working on the “when you rise” part, but weren’t we missing some of the verse?

In the evenings the TV came on and life quickly was passing us by…  Passive entertainment “amusement” means to turn off your brain.  Literally to “not think” from the Latin word “muse”, to divert your attention so you can be deceived.  Consider the seriousness of shutting down your brain?  We are a society that seeks constantly to be amused.  Do you want to be a consumer or a producer?  What are you going to put into your mind?

Last night I turned on the television for a while and after 30 minutes or so of watching something I was sickened by the overt sexuality in the commercials and on the commentary show that was discussing the movie I was watching.  The girls came home from their meeting and I decided to turn it off.

Does this mean the TV will never be on in our home?  No, this is not some sort of a path to piety.  This is not a means by which anyone will be guaranteed salvation.  It’s a step to engage my family in something that will profit us for eternity should the LORD be merciful.

So what do we do in the evenings?

It’s been over a month since my brief conversation with Geoffrey Botkin and I’ve made some dramatic changes in our home life.   I’ve sought my children’s forgiveness for leading them poorly.  We had a family meeting and discussed our purpose in life.

We now gather in the evenings as a family and we have meaningful conversations.  I’ve actually learned more about my children and what’s in their hearts.  We started reading together or listening to valuable Bible teachers.

Deuteronomy 23:14 For the LORD your God walks in the midst of your camp, to deliver you and give your enemies over to you; therefore your camp shall be holy, that He may see no unclean thing among you, and turn away from you.

So here is the division between the camps.  If the LORD God walks in your camp you will be holy, you will not see unclean things.  He will either deliver you or He will turn away from you.  Today I hope you will be encouraged and challenged by God’s Word.

God is calling you today to stand firm for Him and to conquer this world for Him.

Psalm 144:1-2 Blessed be the LORD my Rock, who trains my hands for war, and my fingers for battle-my lovingkindness and my fortress, my high tower and my deliverer, my shield and the One in whom I take refuge, who subdues my people under me.