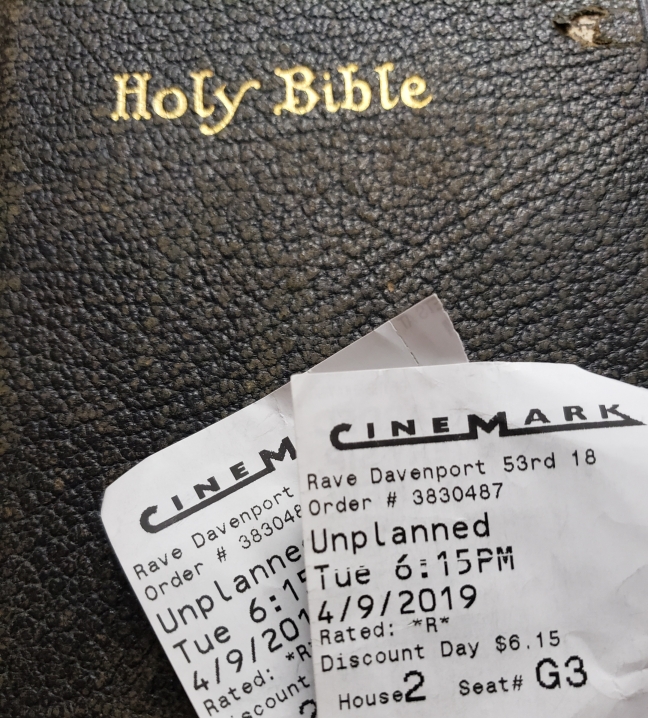 In no way am I reviewer of movies, but I’m offering my thoughts on this movie from a Christian perspective and the importance of maintaining or even developing our worldview as Christians.

I had heard a few things about the movie.  Some positive, some negative.  I have friends with strong opinions about the lack of gospel clarity and choose not to support the film.  I have no problem with that.  It is a conscience issue that should be respected.

I’ll say at the outset that I believe abortion should be outlawed and completely abolished but yet that may not happen in my lifetime and if it doesn’t would fewer abortions be better?  I say yes, and so sometimes incrementalism is a reality of life and where I find value in the movie if this can help sway the minds of a generation to the evils that are clearly shown in this film.

Abby Johnson worked for Planned Parenthood, and she defected from the organization, and this movie is the story of her time with Planned Parenthood, primarily focusing on her realization that the babies being murdered in the womb were actual human lives.  There is a powerful element as her convictions grew through markers along the way.  There are portrayals of abortions that will have you squirming in your seat.  In one scene Abby says to her husband “abortion is not pretty.”  It is a baby being evacuated from the mother’s womb.  It’s gritty and powerful and disturbing.

There are a lot of Christian cliche’s and what I call the “cheesy-ness” of the religious themed movies.  You know, how everything turns out good in the end and even though there are some problems along the way, all ends well.  For Abby Johnson, she came to see that the end of her time at Planned Parenthood also meant that she was complicit in the death of over 20,000 unborn children.  This is real, and it’s a powerful scene that could have led to a perfect opportunity for a gospel presentation.  While Abby is coming to the realization of her sins against God her husband says, “you need to apologize.”  He goes on to say that God forgives and God loves her.  While it is true God forgives, God’s love is not to love without conditions.  It’s more than telling God, “I’m sorry.”  While Abby appears to grieve does she grieve unto repentance and faith?

I also found myself troubled by the behavior of Abby’s husband, Doug.  He is unapologetically pro-life in the movie, but from a Christian perspective, he really does nothing other than disagree with Abby about her work at Planned Parenthood.  Here we see this weird toggling between opinions about Christian religion, as the Johnson’s are shown in one scene attending a church service.  True Christianity draws clear lines of distinction between tolerating willful sin and sinful behaviors.  While Doug clearly shows love for Abby, is he really loving her by not confronting her with the reality that she is against what God has clearly declared sin?

I found another, somewhat cheesy, a portrayal of those that stand on the front lines against abortion.  The movie shows two types of groups at first but focuses it’s energies on the 40 Days of Life group that is there to offer support, prayer, resources and actually try to engage those going into getting abortions in a kind and loving way.  The other group is portrayed as, let’s say, “wacko.”

Having worked on the front lines of abortion ministry, it’s a hard balance to strike.  Some women go in with hard hearts, as one woman is shown bringing her young daughter with her as her mother pleads for her not to go through with it.  Then others are crushed under their guilt and the decision they face.

Gentleness, love, and respect should always be the demeanor of Christians on the front line of abortion ministry, and my thinking has changed over the years as to the best approaches.  In the end, I side with pleading for the life of the child along with offering other choices, care, and compassion for those that are about to end the life of their children through the act of abortion.

My biggest disappointment with the movie was the blown opportunities.  I mentioned it above where Abby has come to see her sin, and her husband gives her an unbiblical response to how she should deal with her realization of sin.

Clearly, Christ Jesus came into the world to save sinners (1 Timothy 1:15).  We’ve all sinned, and fallen short of the glory of God. (Romans 3:23)  A simple acknowledgement of this reality is not a gospel message nor does it indicate saving faith.

Going to God is not an act of apologizing for our wrong doings, Abby’s husband tells her that she should beg God for mercy.  Seeking mercy from God is a biblical response to the horror of our sin, but in Abby’s case, the message of the cross was never presented.  She was not told that yes, your sins are heinous in the eyes of a Holy God and the murder of 20,000 children is especially grievous to God, but we don’t just say, “hey, sorry about that God, pleeeeeeese, forgive me…”

God can, and does forgive all that come to Him with a desire to turn from their sins, and I believe that is availalbe for Abby Johnson or the most heinous of all Planned Parenthood employees, directors, doctors, and patients.  We all need Christ’s forgiveness.  We are all invited to freely drink from the water of life, but there is a biblical way to define coming to Christ that we are humbled under the reality of our sin, understanding we have no hope in and of ourselves and looking to the cross as the solution to pay the penalty and the guilt of our sins.

I have great hope that the horror of abortion and the lying and manipulative techniques of Planned Parenthood can be exposed through this movie through under cover videos and any other vehicle that can be used.  But unless someone comes to the gospel of Christ, their sin will never be paid for.  No matter how much good they’ve done on this earth, only the blood of Jesus can wash away your sin.  It is in that missed opportunity that I grieve over this film.  There are some good Christian elements in the movie but leaves off presenting a clear explanation of the gopsel of Jesus Christ.

By all means, see this movie if you are so inclined.  Cry over the loss of innocent lives, and be humbled at the reality of God that still saves sinners.  Use this as an opportunity to have discussions with friends or your children about the sinful behavior that leads to abortion.  In this respect, there is value in Unplanned.

2 thoughts on “Unplanned the Movie Review”