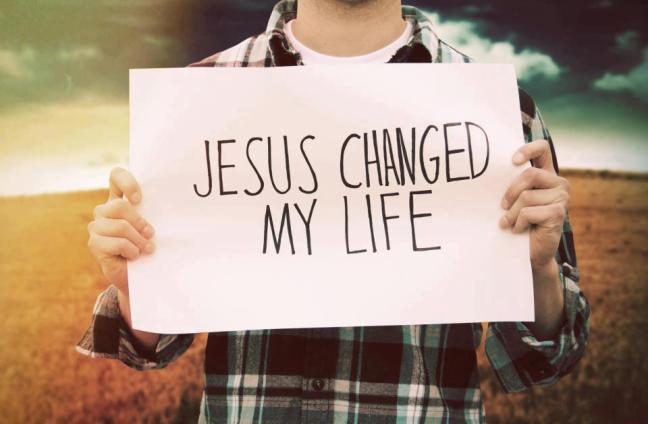 I recently saw this quote on a church sign and I thought about it on my way to where I was going.  It really seemed like a good quote at first blush and as I thought more about it I wondered if it’s true.  I don’t mean to say it’s not true in the fact that Jesus Christ changes lives.  That is unequivocally true.  That is without a doubt what will happen in the life of a believer; they will be changed or they were never converted.

Paul tells us this plainly.

Therefore, if anyone is in Christ, he is a new creation.  The old has passed away; behold, the new has come. – 2 Corinthians 5:17

This is absolutely about changed lives.  It is the evidence of a changed life.  God gives us new desires, new goals if you will…

Why write a blog article about this?  Am I mincing words?  Splitting hairs?  Picking nits?  It seems so judgmental in some ways to take what seems like a positive message and ask questions about it.  The reason I ask the question and the reason I want to think about this topic is that I see, with many evangelical churches, the idea is to appeal to emotion or appeal to our sense for a life that is better in a temporal or earthly sense.

The thief comes only to steal and kill and destroy.  I came that they may have life and have it abundantly.  John 10:10

Well there you go…  an abundant life.  That is the goal Jesus has for everyone right?

But of course in the context of the Lord’s message he is contrasting killing and destroying with life.

John 3:16 For God so loved the world, that He gave His only Son, that whoever believes in Him should not perish but have eternal life.

When we consider the message of the modern church it seems they mostly want to appeal to the desire for things to be better in the temporal sense and this is what drives them and in turn they teach from this perspective leading to more people thinking it’s all about them.

What about the cause, how does the cause factor into the equation and why?  What is the purpose of all of this, although not completely wrong, why is the message somewhat misguided?

Jesus gives us a pretty good clue in His conversation with Nicodemus.  Nicodemus had bought the message hook, line and sinker.  He believed God was there to restore the nation of Israel to prominence.  After all these years of oppression and God’s silence, finally, someone arrives on the scene that is doing things nobody had ever seen.  No doubt this guy is sent from God.  Because NOBODY can do these signs unless God is with him.  That is what Nicodemus said, he clearly got it.  But did he?

And as Moses lifted up the serpent in the wilderness, so must the Son of Man be lifted up, that whoever believes in Him may have eternal life. – John 3:14

Whoa… did Jesus really just say that?  The Son of Man must be lifted up…  He of course was referring Numbers 21:9 and the Israelites needing to look to the serpent on the pole to be saved from sure death, Nicodemus didn’t miss this reference, but by being lifted up He is displaying the glory of God in the work that Jesus was sent to do, the work of salvation for His people.  He came to prepare a way for eternal life for those that would believe.  And in this conversation Jesus refers back to the message that He said Nicodemus should have already known.  In effect He said, “I can’t believe you don’t know these things.”  “What is the matter with you, aren’t you the teacher of Israel?”

What a stern rebuke.

Here is the reason God changes lives.  He does it for His names sake.  It is His glory He is concerned about and while we are the recipients of Divine favor and Amazing Grace, it is all about Him.  That is a seismic shift in the thought process.  Is our thinking focused on His glory or our benefit?

The basic concept of Secular Humanism that all is for the benefit of man and all thought revolves around us.  Instead, Biblical Christianity says it is all about Him and we are just in awe of the mercy that He would show to despicable little creatures is beyond my grasp.

I know it’s subtle and I know to some it appears nitpicky, but what is at the heart of the matter is eternally important to God.  He saved us to be ambassadors to make His name known to all the nation’s and if we are mostly focused on us then it gets tough to think outside our theological boxes.